This blog post was written by our Health and Wellness intern, Alexa Curtiss. She is a graduate student from Wheelock College pursuing a degree in Child Life.

The “Message in a Milk Bottle” program has become an annual spring tradition at Boston Children’s Museum, and allows the Museum’s Health and Wellness Educator intern to create and run a special themed activity for children of varying ages, abilities, and circumstances. This Spring it was my turn, and I was excited to be able to create a project that would not only involve children visiting the Museum, but that I would be able to take it out into the community and include pediatric patients at both Shriner’s and Franciscan’s hospitals, as well as students from the Campus School at Boston College. I titled my activity “Every Fish is Unique”. 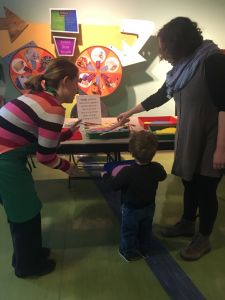 For the first part of the project, children were asked to choose a paper fish cut out from a variety of pastel and bold hues. They were offered colorful strips if they wanted to “weave” the body and make fins, and then were able to further individualize their fish using crayons, markers, craft feathers, and sequins. As they worked we talked about how, just as every fish was special, different and unique – so too is every child. When they come together, they all make up one big community. 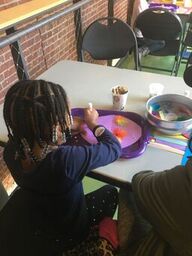 Having already visited and worked with the children at the hospitals and school earlier in the month, I brought their completed fish to the Museum on April 23rd, when I ran the activity for visitors. As I chatted with the children while they worked on creating their fish, I began to assemble the second part of the project. This was a huge 5’ x 9’ fish which I hung in the window of the Museum, to which I began affixing all the completed fish. This allowed me to visually demonstrate the second part of the message: showing how, by putting all the very different and special fish together, they created and contributed to a beautiful and unique community.

One very unexpected aspect of the project began to reveal itself as I began adding the individual fish to the larger one: the sun came streaming through the window and seemed to light up the fish, creating almost a rainbow effect, which to me signifies the beauty of diversity within a community! The big fish remained “swimming” along on display at the Museum through the end of April, continuing to spread the message of the value of diversity in community to all who viewed it. 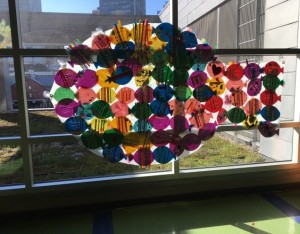