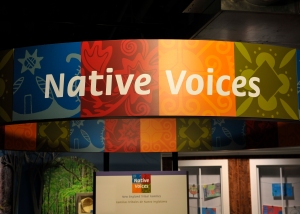 Recent issues have arisen with the lack of career costumes available for girls, or the prevalence of sexualized costumes for young children. Empowering costumes are challenging to find and a number of websites recommend dressing in Native American costumes. However, many Indigenous communities disagree. This has been brought to the forefront here at Boston Children’s Museum with the reopening of our exhibit Native Voices. Begun in 2010 and developed with an Indigenous Advisory Board from all of the tribes represented, it became clear that of the many goals of this exhibit the most prominent include dispelling stereotypes, correcting misinformation, and conveying that contemporary tribes continue to revive and evolve their cultural traditions, values, and communities.

In 2005, the American Psychological Association (APA) declared that stereotypical images of Indigenous people further traumatizes and stresses American citizens nationwide and called for the retirement of all Native American sports mascots, stating that the:

Like many cultures around the world, there are both negative and seemingly positive stereotypes applied to Indigenous peoples. However, Indigenous communities advocate for accurate representations as real people, living and working, bringing up kids and being themselves, wise or funny, serious or silly.

Many portrayals and Halloween costumes of Indigenous people focus only on the past, often leading to the misconception that these cultures are part of the past and no longer exist. Indigenous blogger Bear Witness says:

When you’re in a world that sees you as a mascot with warpaint and feathers, issues of representation become of extreme importance. We dress and live like everyone else. We don’t live in teepees, we don’t hunt buffalo. All those things that are part of the stereotype are ways of dehumanising us.

Native women have been highly sexualized throughout history and in pop culture. There are any number of examples I can pull from, the “Indian Princess” stereotype is everywhere—think the story of Pocahontas, or Tiger Lily in Peter Pan, or Cher in her “half breed” video, or the Land ‘o’ Lakes girl, seriously almost any image of a Native woman that you’ve seen in popular culture…But the pervasive “sexy squaw” is the most dangerous, especially when you know the basic facts about sexual violence against Native women.

Another costume sold for men is the “Savage Warrior”, an angry Indigenous person – often male – “waiting to massacre innocent pioneers without the slightest provocation.” The warrior stereotype is sometimes presented as positive, because it presents Indigenous people as brave, but Devon A. Mihesuah (Choctaw) writes about how these so-called positive stereotypes are still damaging:

All these portrayals of Indian violence may really be a backhanded compliment, for it appears that many non-Indians admire the fighting abilities of Indians. One of the most respected traits of Indians is that they were often difficult to defeat, so when they were subdued, it enhanced their conquerors’ reputation.

Stereotype: Indigenous people are all alike

A common presentation is of an Indigenous person dressed in a leather tunic with leggings or a loin cloth, bare chested, and with a full feather headdress. Devon A. Mihesuah (Choctaw) attributes this homogenous image to popular culture:

Filmmakers and non-Indian artists, however, devote most of their attention to the Plains tribes that historically hunted bison and lived in tipis. But tribes in the west, New England, around the Great Lakes, and the Arctic didn’t live in tipis (or at least not in big, buffalo hide tipis). Most of them didn’t wear their hair in braids, nor did they wear headdresses.

There are over 500 uniquely different Indigenous tribes in North America, with varying forms of regalia, traditions, and beliefs.

Many Indigenous people and authors state that they believe no malicious intent is behind the wearing of Indian costumes. The hope is that through education and advocacy that the world will find other ways to show respect. Blogger Kyle Dlaakaw.éesh Wark (Tlingit) writes:

If you want to honor and flatter us, fight for Native people’s right to access subsistence resources on our traditional homelands. Advocate for Federal or State recognition of Tribal sovereignty, which includes land management, the protection of our people from domestic violence and sexual assault in Tribal courts, and Tribal management of child custody cases. Recognize the inherent connection between perpetuating Native life ways, including art forms and diet, and our strength as Native people, including raising up strong families. Testify on our behalf in the legislature. Donate to Native causes, volunteer at Native events. Celebrate our entire way of life. Don’t dress like us for one day of the year. “Playing Indian” trivializes the historic trauma, culture loss, and heartache of Native peoples.

Here at Boston Children’s Museum, we believe that children are learning every minute of the day. In choosing costumes for Halloween, consider how stereotypes perpetuate misconceptions. Halloween should be a fun time for everyone.