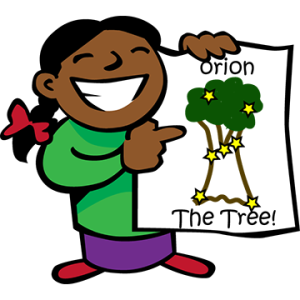 Constellations are pictures that people have imagined in the patterns of the stars. They are now accepted scientific ways of organizing the night sky. This idea that a scientific model could begin with imagination might seem surprising, but should it be? Albert Einstein once said, “Imagination is more important than knowledge.” He was pretty smart. This activity, based on “Constellation Creation” from Boston Children’s Museum’s Beyond the Chalkboard curriculum, invites you and your children to look at star patterns and imagine your own new constellations, while practicing STEM skills like observing, recognizing patterns and thinking creatively. This kind of creative activity encourages children to make personal connections to objects in the sky, and to seek out their new constellation when you look up together at the sky at night.