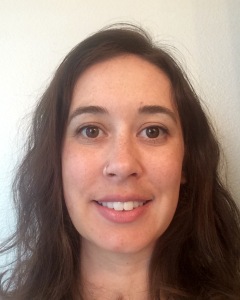 Kolie Swavely is the Elvira Growdon Intern for Collections Management and Curatorial Practice for summer 2017. Her work at Boston Children’s Museum has focused on cataloging and digitizing the Polynesian collection and finding cultural materials that connect to stories, myths, and legends around the world. She is completing a graduate certificate in Museum Studies at Tufts University.

Hello! Or, as the greeting goes in New Zealand, Kia Ora!

As the current E. Growdon Intern at Boston Children’s Museum, I work within collection’s storage, a place that some could compare to the likes of a secret garden. Now, imagine that garden filled not with flowers, but with ethnographic artifacts and pieces of cultural history collected by world travelers over 100 years ago!

As museums continue to care for their collections, ensuring that each and every piece of art and artifact is in the best condition possible, it is easy to lose track of the stories each one tells, and has yet to tell. Like a fish to a glittering lure, there is always an artifact that catches your eye, beckoning to be explored and revived. Here at Boston Children’s Museum, I myself have been hooked. While carefully documenting objects, I continue to uncover many that speak to me; and this fishhook I present today definitely speaks loudly of its cultural origin, the Māori of New Zealand. 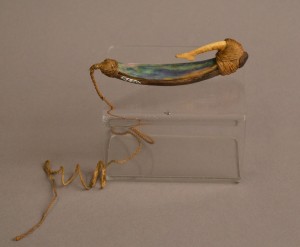 This beautiful fishhook (above) was donated to Boston Children’s Museum in 1915, along with many other exemplary artifacts of Polynesian culture at the turn of the last century. It was hand-crafted using traditional methods by a member of the Māori community—Māori (“mow-ree”) is the name for the indigenous people, culture, and language of New Zealand – Aotearoa.

The fishhook has a beautiful inlay of abalone shell, or pāua as it is named in the Māori language (te reo).[1] Pāua shell is placed into a crescent-shaped piece of wood, set behind the carved bone fishhook (matau).[2] The shimmering iridescence of the mother of pearl would have attracted fish to the hook; the hooked fish would then be hauled to the surface using the hand-line method of fishing. The matau is attached to the lure by sennit cord. Sennit is a braided cord that would likely have been made from the strong and malleable fibers of native flax plants (Phormium tenax and Phormium cookianum), which one can find growing wild throughout New Zealand.[3]  A longer sennit cord is wrapped around the top of the fishhook as the hand-line, thus proving the strength and flexibility of flax as a valuable material.

Why is this fishhook so significant, compared to the hooks we use here in New England? It so happens that there is captivating Polynesian mythology centered on a very powerful and sacred fishhook, somewhat like the one I’m sharing today. For those of you who have seen a certain recent animated film based in Hawaii, you may be aware of this legend. The legend is known throughout Polynesian culture as, “The Fish of Māui” – or in Māori, “Te Ika a Māui.”[4] Therefore, the fishhook is not just a utilitarian form, it is a revered form which symbolizes the creation of the sacred lands and bodies of water to which members of the Polynesian culture have ancestral ties.

As the legend goes, Māui is a demigod, possessing supernatural powers, yet lives among his people as a member of the community. Māui is known as the youngest of five siblings—some versions of the story say there are three brothers and a sister, while four older brothers are most often mentioned. Yet, Māui is the only one who has such magical abilities; in fact he is attributed to discovering fire, ensnaring the sun, and culling the islands from the sea.ǂ It is by the magic of his fishhook that Māui fished up the North Island of New Zealand, Te Ika a Māui.

One day Māui’s brothers prepared to go fishing by way of canoe, the waka. The brothers did not wish for Māui to go, so he hid in the waka the night before. Once the brothers were far enough from land the next morning, Māui surprised them as he appeared from within the waka; by this point they were too far from land to return and send their unwelcomed brother home. Māui, wanting to prove he could fish just as well as his older brothers, took the lead and directed them to paddle to the deepest part of the ocean where the largest fish could be caught. Once they arrived he began to lasso his large, magical bone fishhook above his head, and tossed it out to the deep sea – baited with blood from his nose. Now, we know Māui’s fishhook is magical, but why? It is said that the hook was carved from the jawbone of his supernatural grandmother, allowing the fishhook to possess and share her powers with Māui. [5]

Māui’s hook caught hold of something, the biggest fish of all! The magic hook caught the roof of the house belonging to Tangaroa, the ruler of the sea. Māui then demanded his brothers paddle as hard as they possibly could to help bring the giant fish to the surface. As they charged on, Māui stood in the waka and hauled up the biggest fish he would ever catch. Once the great fish surfaced, Māui left his brothers to return to the Māori ancestral homeland of Hawaiki to bring back priests who could carry out sacred blessings and rituals over it; Hawaiki is said to be the present day island of Samoa.[6] Before he left, he told his brothers not to eat the fish while he was away, but this is far from what the brothers had in mind. Once Māui left, his brothers began cutting the great fish into pieces, claiming their share of the catch for themselves and family. When Māui returned to see what his brothers had done, he put blame on them for turning the once flat and accessible landscape into the topographically dynamic, yet, majestic land that New Zealand is today.[7] This is how the North Island of New Zealand was created.

The great fish of Māui is now the North Island of New Zealand, Te Ika a Māui. The South Island, Te Waka a Māui, is said to be the canoe that brought him and his brothers to the home of Tangaroa; and little Stewart Island sits at the canoe’s stern as the anchor.

Can you see the shape of the stingray that is The Fish of Māui, today’s North Island? Its barbed tail is the Coromandel Peninsula; its head rests where the city of Wellington is situated, facing the prow of the canoe that is the South Island. You may also be able to spot Māui’s fishhook flanking the side of the fish, creating what is now Hawke’s Bay.

The canoe in this legend is equally important to the story, as is the power of Māui’s magical fishhook. Wayfaring long distances between islands by way of wind and human-powered sea-going vessels is a keystone to Polynesian culture. Polynesia is an ethnic and cultural region spread across Oceania, the region of the South Pacific Ocean. Long before European settlers arrived in this part of the world, the ancestors of Polynesians had already navigated and charted the waters here. In other words, the primary inhabitants of the 6 million square miles of territory within the Polynesian triangle were master wayfarers who navigated the Pacific Ocean. This was only possible by identifying astral points in the sky, reefs, islands, and ocean currents, and using them as an unwritten map.[8]

Boston Children’s Museum also has many toy models of wayfaring vessels similar to the waka used by Māui and his brothers. Here we have an outrigger canoe from Samoa. This outrigger would seat two people, hence the two paddles paired with the vessel. The vessel is made of wood and sennit cord, and has a white geometric motif running along the length of both sides. It was purchased between 1901 and 1902; in 1940 it was donated to the museum by the wife of a U.S. Customs Officer who was stationed in present day American Samoa.

ǂ “The Fishhook of Māui” is one of many Polynesian legends that incorporates the demigod, Māui; you can also find him in stories about how Māui lifted the sky, ensnared the sun, discovered fire, and how he helped create the people of his world. Because Māui is a respected figure throughout Polynesia, story titles and terminology will change, but the primary themes are constant. The version of the legend I share today is from the view of the Māori culture; all terminology is taken from the Māori language, to the best of my understanding. I hope you enjoyed reading about Māui and his magic fishhook, as well as our own fishhook and canoe, just as much as I have.

This story has been interpreted by Kolie Swavely, Boston Children’s Museum E. Growdon Intern for the summer of 2017. June 16, 2017.

[8] The Polynesian Triangle encompasses water and land mass between the modern nations of New Zealand, Rapa Nui, and Hawaii.

Image Sources in order of Appearance: